(This post tells of the beginning and the ending of last year’s Southern Foodways Alliance Symposium.  Appropriate, as the 2018 Symposium begins the day this posts to end this series of throwback thoughts.)

I’ve done a bit of traveling in my half a century.  Perhaps I’ve mentioned it once or thrice.  And it should be a surprise to no-one that as we travel, we find food traditions that are different than our own.  You don’t even have to go out of the country to see it.  Take barbecue for instance.  Eastern vs Western North Carolina styles.  Mustard sauce in South Carolina, white sauce in northern Alabama.  Beef brisket in Texas, mutton in Kentucky.  I could go on and on.  But if you take a minute to see past these differences, you might just see the common thread: people everywhere like barbecue of some sort.  Each style, flavor, meat and source of fire has its own team of loyal advocates, but ultimately they are champions of cooking proteins low and slow.

On the first night of the Southern Foodways Alliance Symposium, we were treated to a dinner that crossed some of those style boundaries.  There is Mexican food, and there is Tex-Mex.  Though there is certainly some overlap between the two, Tex-Mex is a cuisine all it’s own.  Miguel and Modesty Vidal were our guest chefs, from Valentina’s Tex Mex BBQ in Austin, Texas.  Already another boundary crossed: not just Tex Mex, but Tex Mex BBQ.  These are some of my favorite food groups; I was feeling pretty good about this meal already.

We began with a ceviche that featured shrimp, fish and avocado.  If I’m not mistaken, it was at another SFA Symposium that I had my first experience with ceviche, and it was a good introduction.  This one was also a good introduction to the evening. 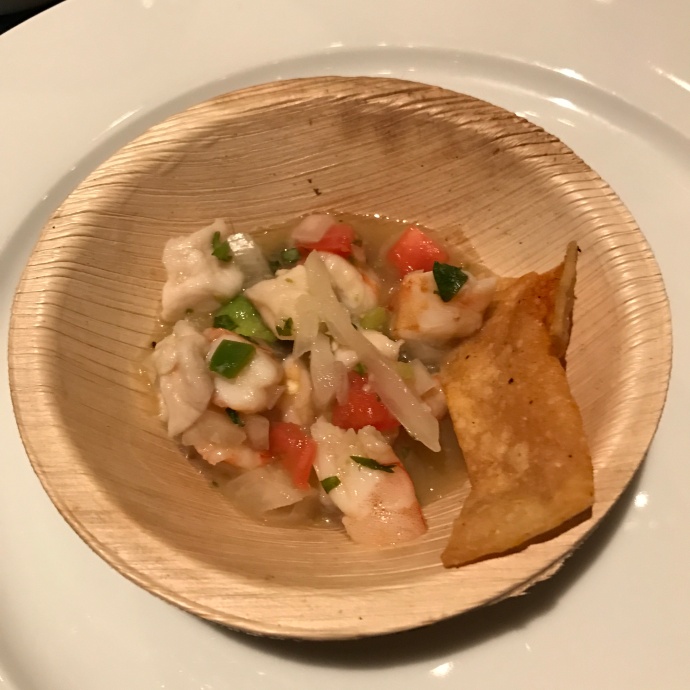 The sides came out family style, in large bowls that encouraged seconds.  First was a cole slaw made from purple cabbage.  Following closely behind was a bowl of smoked corn, reminiscent of Mexican street corn but freed from the cob.  Finally, we were brought a bowl of charro beans, creamy and peppery.  My favorite way to eat these was to get a little bit of each in one bite – crunchy slaw, smoky corn, and savory beans, all in one delicious mouthful.  I kept going back to that, even with the dishes that came next. 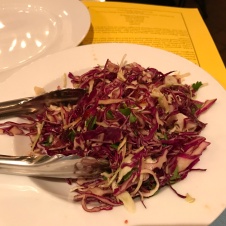 The carnitas tacos were classic, no-frills street tacos – the best kind.  Tortillas, shredded pork, cilantro, and onions caramelized to the ultimate sweetness.  No other accoutrements needed.  Then came the smoked brisket.  It had a dark bark and was served with a bit of tangy sauce on the side.  Our table had one empty place as I recall, which meant there was more brisket and tacos for the rest of us, and that was a very good thing.

I was happy enough, but dessert was still to come: smoked bread pudding.  Fascinating.  It was typical in many ways in its construction, not too far off the traditional bread pudding path.  But the hint of smoke was unmistakable, just enough to let you know it was there. 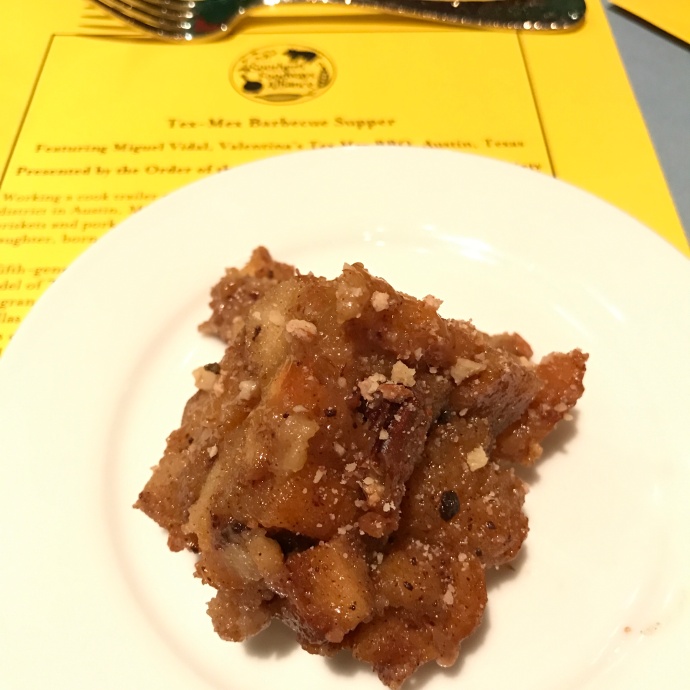 The final evening meal of the weekend also represented a universal food.  In Starkville alone we have oodles of places to get a sandwich.  You can hardly throw a rock here and not hit a sandwich.  I have wondered sometimes if it was just us, but if I take a moment to stop and think, it’s actually a worldwide phenomenon.  Even in our house we regularly cross sandwich borders.  One of our favorite meals is a sandwich made simply with boiled eggs and feta cheese, best served on a crusty baguette.  We learned this one in our corner of the Middle East, the same region where I had a bean sandwich for the first time.  Last week we made paninis with our seriously under-used George Foreman grill and some Hawaiian chicken.  (That may be a stretch for a cross-cultural sandwich example, but it’s a start.)

In Mexico, the sandwich is called a torta.  Sounds like a tortilla, yes, but there’s no illa.  According to one source, the bread for a torta is usually round, and may have originated from French influence when France occupied Mexico back in the 1860’s.  That’s a border-crossing influence I never would have guessed.

Our SFA meal was a Tale of Three Tortas, or as the menu said, Lodge Cast Iron Tortas del Munda (sandwiches of the world).  All had Latin influence, but each had its own flag planted firmly in the bread.  (Seriously.  There were little flags staked in the bread.)

Rodolfo Montero of El Molino in Charlotte made a Torta de Chorizo Espanol, with a side of black pealla (very black) with shrimp and cuttlefish. Sources say a similar Montero-made sandwich in it’s natural habitat (inside Sav/Way Foods) is magic.  Thank goodness Younger Brother lives in Charlotte.  I think it’s about time for a visit.

Jonathan Magallanes, from Las Tortugas Deli Mexicana in Memphis, did his part with a Gulf Shrimp Torta, and more of that corn I love: Elotes (street corn) with Cotija (the Mexican version of Parmesan cheese) and Chile Pequin (a hot pepper).  Also from Memphis, La Michoacana (a Mexican ice cream parlor that seems to have much more than desserts) sent down some paletas (aka ice pops.)  I think it’s safe to say that ice pops span the world in one form or another as well, so these final bites certainly fit the theme.  Though we were sad that the Symposium was ending, it was a terrific taste on which to end.