Big Tex says, “It’s about time you got here!”

I don’t really have a fully thought out, detailed, written bucket list. There are things I want to do and places I want to see before the proverbial bucket is kicked, but my list is more of a loosely formed series of random thoughts bouncing around in my head. Mostly. There was one box to check that until last week hovered over all the others, and it was this: go to the Texas State Fair. I am not a rider of fairground rides – about a decade or two ago my dizzy gene kicked in, and I generally stick to roller coasters in locations where they are actually bolted to the ground. I do not show cows or make prize-winning jars of preserved anything. My goal was to eat my way through the fair. And so I did.
Though I have been to only a few state fairs prior to this one, my guess is that nowadays most of them serve fried foods of some sort, many on a stick. Fried is the new black. Texas, however, has become famous for upping the ante in that culinary genre. It’s not unusual for one state to take the lead within certain foodways, and from what I have observed, Texas is the fried pied piper. If a food has ever been fried, it was probably fried first there.
The best example may be the deep fried butter. I can just sense the looks on some of your faces now. When I posted the picture of this creation on social media, I got quite a few comments prophesying my early demise – others recommended Lipitor, angioplasty, and my own personal AED kit. So let me set the record straight. First of all, that was at the tippy top of my bucket list. (Make up your own “hurrying up the bucket” joke here.) If that had been the only thing I got at the fair that day, it would have been worth the trip. I have been searching for it at other fairs since I first heard about it years ago. Secondly, it was about the size of a small hush puppy. I figure there are more carbohydrates and fat in a grilled cheese sandwich than one of these little balls of buttery deliciousness. And I bet you’ve had more grilled cheese sandwiches in your life than I’ve had balls of deep fried butter. You can borrow my defibrillator. And finally, it was indeed delicious. One tip: eat it all at once. If you bite it in half so you can see inside and take a picture, butter will run all over your arm. Also, it did not escape my notice that the line at this vendor was the absolute longest at the fairgrounds.

Deep Fried Butter. Yes. They. Did.

At this point I may lose the argument I just made. See, the butter was not the only DFO (deep fried object) we had that day. If I counted properly, we had a baker’s dozen. But if it will help swing me back towards a healthier middle, I did have help. One friend flew to Dallas to meet me, just so we could experience it together. (That’s serious, folks.) Another college buddy who lives nearby met us there. So instead of singlehandedly eating a dozen different DFO’s, by the time you do the math, it amounted to about four per person. I like to think of it as a four course progressive dinner, with exercise in between each station. That’s my story, and my arteries are sticking to it.
The Texas State Fair has a contest every year called The Big Tex Choice Awards. I thought there had to be a fried element in order to qualify, but the winner of Most Creative went to a Funnel Cake flavored ale (served with powdered sugar on the rim of the glass), so I guess I was wrong. That’s also the only one of the eight finalists that we didn’t try, but no doubt it was creative. Our goal as a self-appointed tasting team was to try all the of other seven finalists, and whatever else (butter included) we came across that we just couldn’t resist.
The winner for best taste was the Fried Gulf Shrimp Boil. It was baby shrimp, potatoes, lemon, onion and seasoning all rolled around a cocktail shrimp (the tail stuck out like a handle), dusted with fish fry, and fried till crispy. Lots and lots of flavor in one bite – I think I would have voted for this one, too. 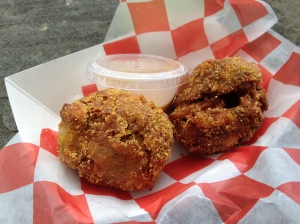 Shrimp Boil with a Handle

We actually started and ended with desserts. Our first dish of the day was the Fried Sweet Texas: pie dough filled with pecan pie, peach cobbler, and buttermilk pie, then fried – with a side of Blue Bell vanilla ice cream. 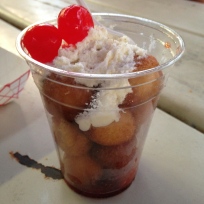 Wait! There was another dessert. How could I forget the Fried Bacon Cinnamon Roll? To get the full effect of this, you need to first imagine an average sized cinnamon roll with finely-chopped pecans, but instead of pecans, the cinnamon-sugar layer is packed with little bits of bacon. Put it on a stick, drop it in the deep fryer, pour glaze on top when it comes out, then add more bacon. Oh yes they did. And so did we.

It’s perfectly normal to eat bacon with (or in, or on) a cinnamon roll.

Stay tuned for the seven savory servings and my visit with a famous funnel cake lady. With this kind of food, it’s good to read in moderation.