(It’s time for the 2019 Southern Foodways Alliance Symposium.  Here’s another look at a tale told through lunch from the 2018 event.)

There are always new people at the Southern Foodways Alliance Symposium.  I was one of those new people once, and a few years later The Wife was a new people.  This year the event was opened up to the public (usually it’s limited to members), so there were lots of new people.

Whenever we sit down for a meal at this eating-meeting we have a choice to make: we can try to sit with folks we already know, which is fun because we often only see them once a year, or we can go potluck (food pun intended) and sit with complete strangers.  The great thing about potlucking with strangers is that they are not strangers very long.  Then you have new friends to sit with next year.

A few years ago, at a lunch early in the weekend, we sat down and began making conversation with a couple of nice ladies from Savannah, Georgia.  And as we conversed The Wife and I discovered that one of them was Mashama Bailey, Chef at The Grey.  Not only was she a chef, she was also the chef that would be making lunch for us the next day.  I’ve seen a little behind-the-scenes video of what it takes to pull off one of these lunches, so in hindsight I’m wondering how she wasn’t already in a kitchen prepping to feed 300-plus people, but hey – chefs gotta’ eat, too, right?  And they don’t want to miss any of these meals, either.

Fast forward to this year.  Since the day we sat with Mashama she has become a finalist for a James Beard Award (Best Chef Southeast), and The Grey was Eater.com’s 2017 Restaurant of the Year.  (Now all the chefs want to sit with us…)  Not a bad resume, considering she had already worked for years with Gabrielle Hamilton at Prune in NYC, and was hand-picked through that relationship to open up The Grey in 2014.  And we are grateful that she was also hand-picked to cook lunch for us again. 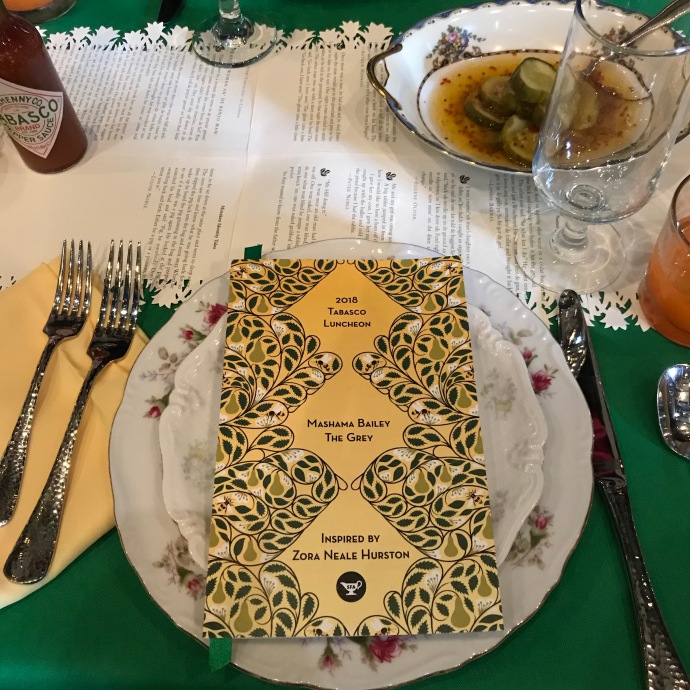 The theme for the SFA’s 2018 programming was the link between food and literature, in a vast number of forms.  This lunch was inspired by Zora Neale Hurston, a writer known for the novel “Their Eyes Were Watching God,” published in 1937, along with more novels, an autobiography, short stories, essays, plays and more.  Hurston was not a cookbook author, but as her biographer, Valerie Boyd (who spoke to us at the Symposium), noted, food was an integral part of her personality.  To research, Chef Mashama worked with Boyd, and read a lot of Hurston’s works for inspiration.  Here’s what she came up with.

On the table as we arrived were what she called “Jook Snacks,” foods that people from her small-town Georgia roots (and Hurston’s in rural Florida) would have eaten simply because they were around.  There were hot buns with preserves, bread and butter pickles, and a platter of pulled rabbit with Tabasco sauce.  How old were you when you first sat down to a platter of pulled rabbit?  On the day we had it, I was that day old.

The second course was Savannah Red Rice with Shrimp, and Stewed Okra.  According to Mashama, chicken and rice was Hurston’s dish, so the translation to Savannah was simple.  Over the last few years I’ve eaten less rice than I used to (you know, carbs and all), but I didn’t hesitate to dive into this.  I’ve even made a version of it before, a baked rice dish flavored (and colored red) by tomatoes, accentuated with onion and bell pepper, and studded with bacon or sausage – or, in this case, shrimp, which was absolutely appropriate for a port city dish.  Stewed okra, of course, is not just okra – it’s got tomatoes and onions going on, too.

The third course took us to the juke joints Hurston wrote about.  Mashama said, “Fish is the ultimate juke-joint food.”  So instead of shrimp and grits, she made fish and grits.  Not like your mama’s fish and grits, though.  (I’m just kidding – if your mama made fish and grits, please let me know.)  These were mostly-whole whiting atop grit cakes so carefully put together they almost looked like thick slices of potato.  So now I have another way to love grits.  Alongside were Tabasco Sauce-braised collards with smoked pig tails.  (By the way, did I mention that this was the 2018 Tabasco Luncheon?)  Again, did your mama put pig tails in the collards?  If mine did, she didn’t tell me – I wasn’t always as adventurous as I am now, so her silence would have been a good idea.  And it was a good idea, indeed – the pig tails, I mean.  Ash-roasting sweet potatoes was also a good idea, served on a bed of thick, red sauce that I meant to ask about…but didn’t.

Let’s talk about dessert.  This is the part where I’ve already confessed in previous writings that I like to hang around and partake of leftovers.  This time was no different.  Tea cakes made with cornmeal and buttermilk were the centerpiece, because Tea Cake is a main character in Hurston’s first novel, and according to Boyd’s biography, cornbread and buttermilk was Zora’s favorite childhood breakfast.  I had a few of these, but not a few too many.  To accompany the tea cakes were candied pears – I love pear preserves and these were an interesting twist – and peanut brittle that was kinda’ fancy.

Not only did this lunch make me want to go to Savannah, it also made me want to read some Zora Neale Hurston.  Eating and reading – two of my favorite things to do.