[What follows is Part the Third of this series on the 2016 Southern Foodways Alliance Symposium.  Working up an appetite for the 2017 meeting…as if that were necessary.]

Over my lifetime the significance of the noontime meal has ebbed and flowed. Even the names have changed. As a kid, we ate dinner at noon and supper in the evening. Meanwhile my friends were having lunch and dinner. If a buddy invited me over for dinner, I wasn’t sure when to show up.
During those early years lunch was likely to be light: sandwiches, soup, maybe just peanut butter and crackers. Either that or whatever the school was serving. Dinner – supper, I mean – was the big meal. That’s where we had the barbecued chicken, lemon pepper pork chops, lasagna, or casseroles. Then I got married and moved across the world. Over there lunch was the big meal, and the evening meal was basically a repeat of breakfast.
So now I’m back where I started, and I have a wife and kids and a chaotic schedule. It’s difficult to find a pattern anymore. One weekend a year, however, we go to a magical place where no meals are to be missed. That place is the Southern Foodways Alliance Symposium. But even there, lunch is particularly celebrated and this year brought some interesting twists.
Most of the meals at SFA have a name – “lunch” is just not sufficient. On Day One we were served a “Midday Meal Absent Colonial Thought.” That took some explaining. Chef Sean Sherman of Minneapolis – aka the Sioux Chef – put together a pre-colonial meal taken from the pantry of the South, “when all Southern foods were Native and so were all Southern cooks.” This meant no sugar, no eggs, no pork, no wheat. Nothing that was brought to the land by the colonists. I could not have imagined how to put a meal like that together, but Chef Sherman has been studying this for a piece. And though not everything on the table was something my 21st century taste buds will crave again, it was truly a meal for the bucket list.
The focus of the symposium was corn, and we learned that a grass known as Teosinte is one of the corn plant’s ancestors. For this meal, the Teosinte was bound with a white bean pulse and smoked fish, garnished with wild greens and a crisp piece of fish skin. Consuming the ancient great-great-granddaddy of corn: that’s definitely pre-colonial. Slightly more recognizable were the slices of duck, with a dollop of honey, crab apple, and corn mush. The salad was a mix of wild greens, mixed with sumac-stewed sun-dried rabbit. I didn’t even know sumac-stewed sun-dried rabbit was on my bucket list, but it is checked off now. 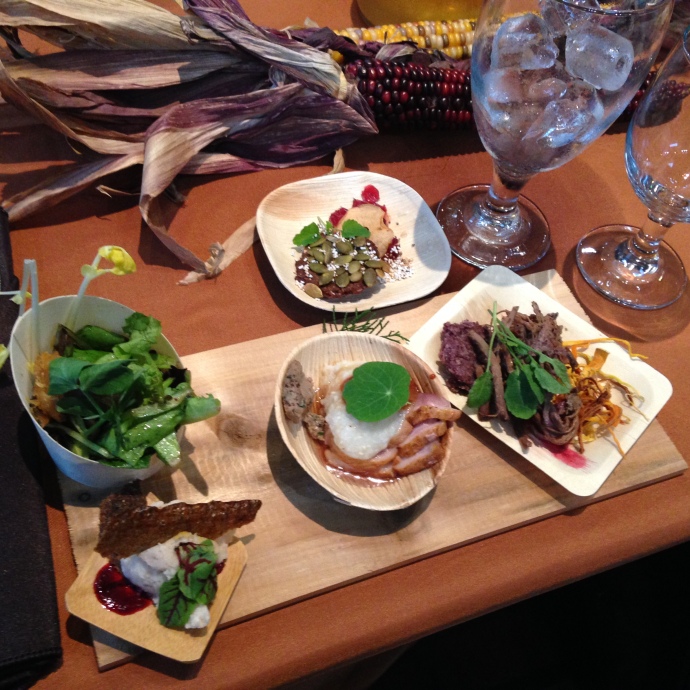 Another meaty dish was cedar bison (that is, bison slightly flavored with cedar) with a corn cake made from Anson Mills Native Coarse Blue Corn Grits. This was probably my favorite dish of the meal. I have looked into buying blue corn grits before – they just look like fun. (Green Eggs and Ham, with a side of Blue Grits – I can definitely see that.) Another favorite at the table was a savory little cake made with sunflower and acorn, highlighted by tiny little beads of popped amaranth.
Would you like to guess what we washed all this down with? You won’t get it right, trust me, so I’ll just tell you. Cedar tea. That’s right. We drank tea flavored by boughs from cedar trees, at least some of which came from Rowan Oak, the home of William Faulkner. One swig and I felt downright literary. 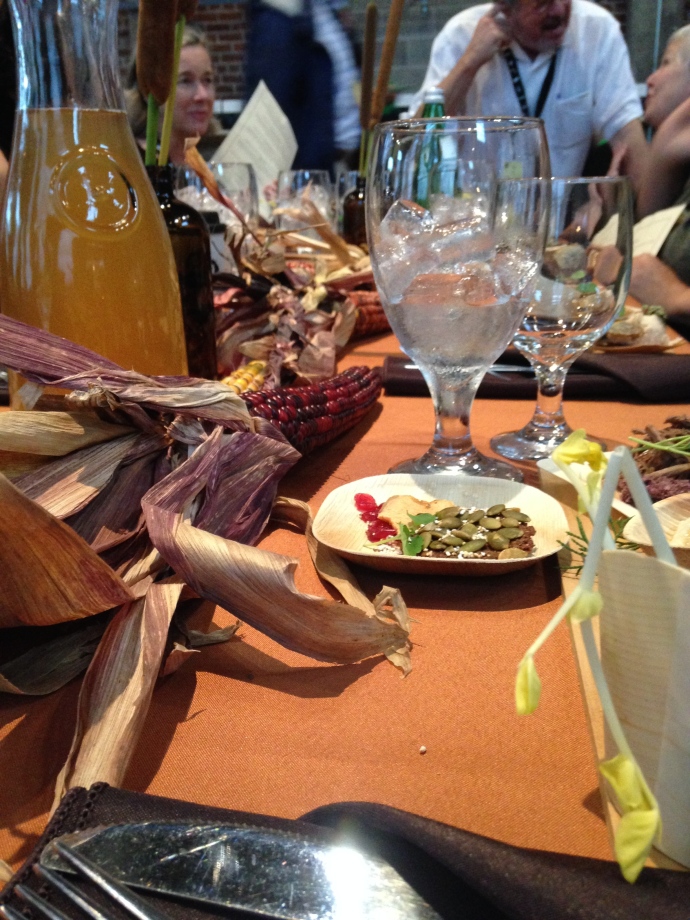 Lunch on Day Two bore the name “Georgia Corn Husker Luncheon” but could have also been called “Corn – Fourteen Ways.” To prepare for this meal, we were told, Chef Steven Satterfield of Miller Union in Atlanta kept a year-long running list of corn dishes. It turned out to be almost a contest to see how many variations of corn he could plant into one lunch. I don’t know who he was competing against, but he surely won the game. Let’s count.
One: Corn Cob Iced Tea. What can I say? We drank corn-flavored tea, and it was better than it sounds.
Two: Homemade Corn Nuts from nixtamalized hominy marinated in lime juice, lime zest and Tabasco. Side note here. Nixtamalization is the process by which corn is soaked in lime (not the fruit – the other kind), hulled, and turned into things like masa, which is then turned into tortillas and such. It essentially transforms the corn into something more nutritious. I’ve certainly oversimplified it, but it’s an important process. The more you know…
Three: Paprika Popcorn. Just a little snack.
Four: Pickled Cornlettes. AKA baby corn on the cob.
Five: Anson Mills Blue Corn Nachos topped with black-eyed peas, green tomato pico, turnip greens, pickled jalapeno, radish. If we had stopped there and jumped to dessert I would have been completely satisfied. But there are nine to go. 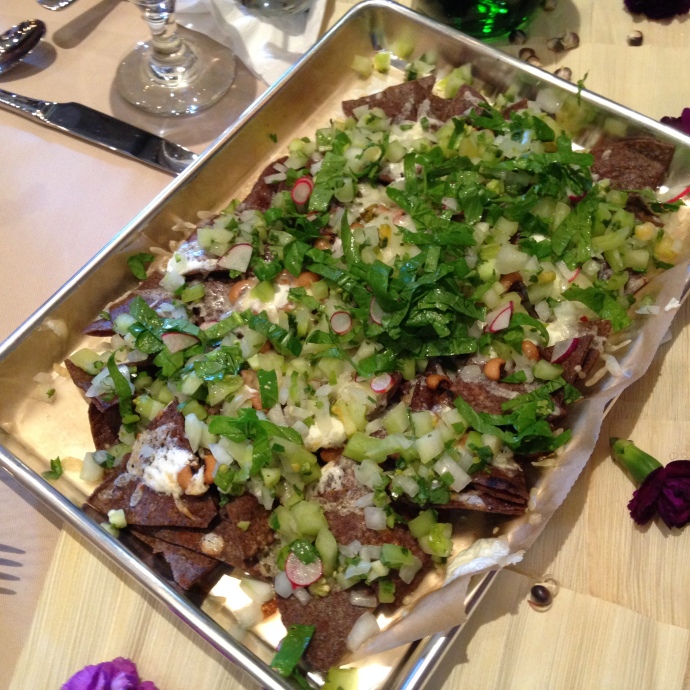 Six, seven, eight and nine: Smoked trout, (6) Jimmy Red Grits, pepper gravy, (7) corn and pepper relish, (8) charred corn, crispy trout skin, (9) skillet cornbread and greens. Just a word here: loved the color-speckled grits. Except for the cornbread, this was all together in one big bowl – as delicious as it was colorful. And the greens were all up in the cornbread – I’ve eaten greens and cornbread together before, but not greens baked into the cornbread. 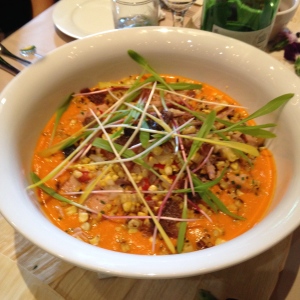 Ten and eleven: (10) Sweet corn, field pea and duck confit succotash, (11) cornmeal spoonbread, pumpkin-persimmon jam and arugula. Maybe my favorite (until dessert). The spoonbread had two layers, creamy on top with a little more texture on the lower part. This was a plate for the ages.
And finally, corn-coctions twelve, thirteen and fourteen: Ice cream sandwiches made with (12) cornmeal blondie cookies, (13) sweet corn ice cream (much better and milder than the batch I made a few years ago), rolled in (14) corn dust. I ate several of these. They were little and I am not. Definitely not now. 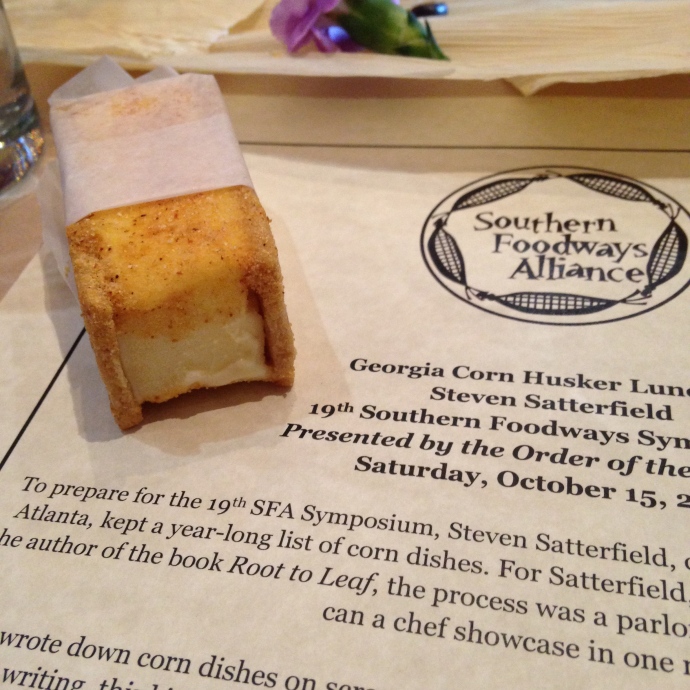