(In just a few short weeks, the 2019 Southern Foodways Alliance Symposium will begin.  As has become my habit, as the day approacheth, I’ll look back at the 2018 Symposium.  Let the drooling begin.  And what better way to begin than breakfast?) 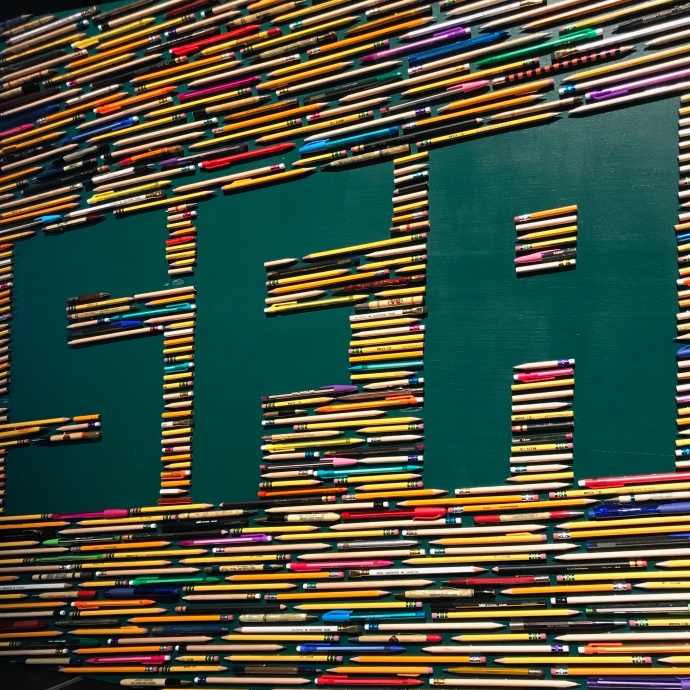 I look forward to breakfast.  Full stop.  There are days when it’s just a banana, a single (albeit large) cup of butter coffee, or – heaven forbid – plain eggs.  But not if I can help it.  I seek adventure in the breakfast nook.

The offerings for early morning repast at the Southern Foodways Alliance Symposium never fail the thrill seekers.  Normally, there are glimpses of recognition.  Last year we had Mote Pillo, which is scrambled eggs (check) and hominy (huh?).  Now if I’d said eggs and hominy grits, nobody would have blinked an eye, but these were grits in their native form – unground, whole kernels of hominy.

Last year’s other breakfast featured a riff on Eggs Benedict, at least for those with a big imagination.  Biscuit instead of English muffin, chorizo instead of Canadian bacon, chipotle gravy rather than hollandaise sauce – the only bridge between the two was the poached egg.  It was even served in a cup.  But I licked the cup.  (Not really – that’s figurative.  If you’ve ever tried to lick the bottom of a cup, you’d realize, like me, that it’s practically impossible.  And I never remember to pack my tiny silicone spatula like my friend carries in her purse, to scrape up every last bit of deliciousness.)

This year was no different.  Of course, we have to have our morning coffee, and Royal Cup takes good care of us.  In addition to the hot coffee that was much appreciated on those finally cool mornings, we also got to taste their new cold brew products.  But wait!  There’s more!  They also had bottled iced tea for the first time, including a peach variety.  The tea was more of a “Here is something new to try, and we are here now, so please take one and enjoy it later,” than a “Don’t you drink iced tea for breakfast?” type of situation.  I’m particularly fond of peach tea, and this one ranked high.  I described it to The Wife as a peach juice drink with some tea added, perhaps even reminiscent of what a peach Jolly Rancher would taste like if it were made from natural flavors.  Please understand – these are good things in my view.  And the sweet tea version (sans any fruit flavor) was just the level of sweetness I would want with a big barbecue sandwich.  But we were talking about breakfast, weren’t we?

Day One was completely unexpected, as expected.  I’d seen a social media post from an early riser before we got there and knew that there would be a rice waffle, smeared with clotted cream and topped with peach slices.  That alone would have been sufficient.  I’m all about waffle variations, and seriously – how many of us get up in the morning and smear clotted cream on anything?  That’s special.  But here’s the good part.  Chicken and waffles are a big thing now – it’s the new shrimp and grits for restaurants that claim Southern roots.  As Chef Cynthia Wong of Life Raft Treats (Charleston) handed me what appeared to be a chicken drumette in a clear plastic envelope, she described the dish: “Not Fried Chicken and Waffle.”  The Not Fried Chicken drumette was ice cream.  I know!  Isn’t it great to be an adult??

We’ve probably all had oven fried chicken at some point in our lives, coated in crushed corn flakes or the like.  Ditto here (plus caramelized white chocolate), which made everything look normal.  But after taking a bite of the drumette you could see it was white instead of the usual dark, because … it wasn’t meat at all.  It was waffle ice cream.  There was even a chocolate cookie “bone”.   Call me flabbergasted.  And allow me to be accountable: as breakfast was winding down, I noticed some Not Fried Chicken still sitting around and it’s a crime to let ice cream melt unnecessarily. (It was cool weather, but not that cool.) I’m sure you can guess what happened next.

The next morning was more of the same when it came to creativity, though there was no ice cream involved.  I’m told that Chef Kelly Fields of Willa Jean Bakery and Cafe is known for her biscuits.  The restaurant is in New Orleans, and I haven’t been to NOLA since Katrina, so I’ve been out of the loop.  I’m very thankful that the loop snuck up to Oxford for breakfast and brought me in.

Have you ever been handed a breakfast biscuit or the like, wrapped in a foil wrapper, and your first thought was, “This is heavy.”?  I saw the description on a stand at the end of the table: I knew it was a biscuit with boudin and greens.  But my usual modus operandi is to go back for a second breakfast (after a polite wait, of course), be it a fresh serving or half The Wife’s.  Due to the sheer weight of what I held in my hand, I wasn’t sure that would happen this time.  The biscuit was squarish, flaky, and golden buttery brown.  The collaborative layer of collard and mustard greens was chock full of ham chunks.  The boudin was in patty form, crisp on the outside, perhaps pan-fried.  I’ve had boudin in many iterations – perhaps even in a biscuit once – but never in a biscuit with greens.  And each biscuit came with a tiny bottle of green Tabasco sauce, for those who dig it spicy.  It served as our breakfast, but I could have one at any point of the day.  Willa Jean?  I say, Willa Genius. 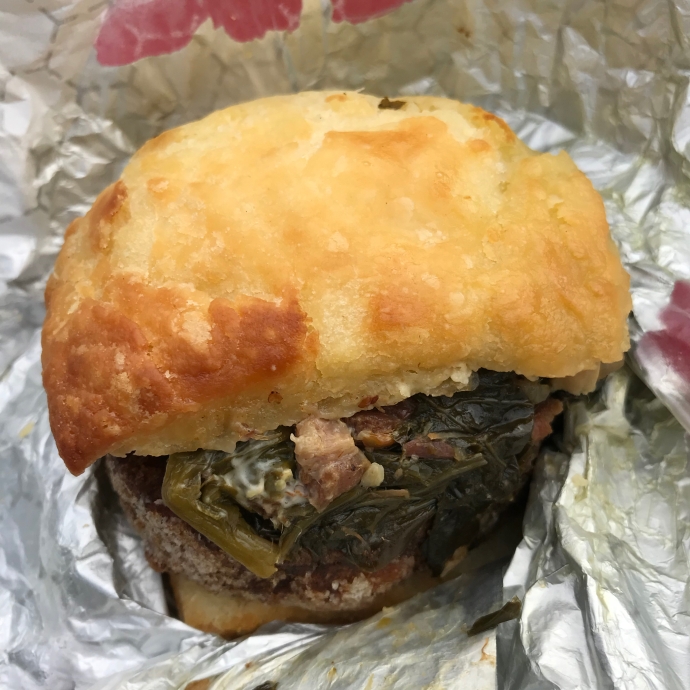 Two great starts to two great days.  Then again, it’s hard not to have a great day when they start off with happiness and joy, or in this case, ice cream and collards.