Faulkner and the Oxford Curry

(As this posts, I’ll be getting ready for breakfast at the 2019 Symposium of the Southern Foodways Alliance.  Meanwhile, my appetite is already jump-started by looking back at another of the meals from the 2018 event.)

It was an auspicious beginning.  The Wife and I had just stepped down from the top level of Oxford’s double decker bus, after a tour of literary landmarks around town.  We walked a short distance down a sidewalk, then onto a well worn path that eventually led to perhaps the most auspicious of those literary landmarks: Rowan Oak, the home of William Faulkner.

This was the opening reception for the 2018 Southern Foodways Alliance Symposium, held on the lawn at Faulkner’s home.  There were lights in the trees, twinkling as the sun set, and for those so inclined, Joe Stinchcomb, director of the bar program at Saint Leo restaurant, had cocktails waiting which included whiskey, one of the author’s favorite beverages – in this case, Maker’s Mark.  Though I was fascinated by the commemorative glasses (dipped in red wax, like the seal on the MM bottle), I was even more fascinated by what was being passed around on the plates.

I hope the reader (as well as those involved with the hors d’oeuvres) will forgive if I get a bit of this wrong – I’m more of a storyteller than a journalist, and more of an eater than a storyteller.  In other words, I need to learn to take more notes, ask better questions, or both.  In any case, the program credited this welcome snack to Chef Dan Latham, another of the collaborators at Saint Leo.  But on the serving tables were cards describing the meats available at Pine Street Market in Avondale Estates, Georgia.  So I’m going to assume that Chef Latham put this together using meat from Pine Street Market.  Sound good?  Well, it was.

What I did write down was that the pork belly on these sliders was made from one of Faulkner’s own recipes, marinated in molasses for 30 days.  I wanted to know more about this, and sure enough – it didn’t take a very challenging web search to find “‘Pappy’ Faulkner’s Recipe for Curing Pork.”  And sure enough, molasses was one of the primary ingredients.  Slices of the dark, richly flavored pork belly were topped with a red cabbage slaw and served on a sweet potato roll.  Between the whiskey and the pork belly, Faulkner’s spirit was very much among us at Rowan Oak that evening.

From there we moved en masse (this time by single decker bus) to the Powerhouse, home of the Yoknapatawpha Arts Council, where most of the SFA dining takes place.  Waiting there for us was the Oxford Curry, our first dinner of the weekend.  According to SFA Director, John T. Edge, there was a hidden joke in the name – something about the Oxford comma – but I never really got it.  Again, not an official journalist.  But definitely an eater, and a hungry one by now.

There is a particular group of chefs, all of Indian descent, who have settled in the South.  Of late they have come together to create dinners that showcase their culinary styles and heritage, while at the same time featuring local ingredients and Southern themes – they call it the “Brown in the South Supper Series.”  Volume One focused on “masala meets meat and three”; the second dinner celebrated “Indian Summer.”  Our dinner, led by two of those chefs, Meherwan Irani and Cheetie Kumar (and friends), was all about redefining what the word “curry” represents.

When we arrived at the table, we found dishes of Achar pickle, Raita yogurt, Kachumber salad, Papadum crackers, and Naan bread.  I won’t say that I could have made a meal out of this, but I will say that the Papadum and Naan were among my favorite bites that night.  Simple pleasures.  Similar sentiments for the Jeera Chawal (cumin-scented basmati rice): it was the anchor for all the other dishes.  Having lived on that side of the world for a season, in a place where cumin was a pantry staple, I developed a taste for the spice I first knew as “kemoon.”

Of all the foods in the world, I am perhaps least acquainted with Indian foods, so I am relying on the menu that was provided to us that night.  Perhaps this is something I should work on in the new year.  But in the meantime, here’s a rundown:

Konkani Fish Kadi.  This was the representative seafood dish, from the southwestern coast of India, but made with Simmons Catfish from Mississippi, which happens to be near the southwestern “coast” of the state if you’ll allow the Mississippi River to be a coast of sorts. The fish was bathed in coconut milk, spiced with red chilies, garlic, black pepper, curry leaves and fresh lime.  My horizons are expanding.

Goan Pork Vindaloo.  The spicy one, from the Portuguese colony of Goa, and did you know the Portuguese brought the chili pepper from the Americas?  What goes around comes around, it seems.

Punjabi Butter Chicken.  This one I knew a little something about.  I’ve actually made a version of this from scratch, and have tried several bottled sauces as well.  It’s my fave, my Indian comfort food if you will.  The chefs used charred bell peppers to add a smokiness and jaggery sugar took the place of the refined stuff.  The color red was played by Kashmiri chilies.

Maharashtan Aloo Gobi.  Such a fun name for a vegetarian dish.  Potatoes, cauliflower, onion, garlic and chilies.  And finally…

I don’t have real insider knowledge, but I’m guessing another Brown in the South dinner will pop up soon.  If it’s nearby, or you feel like a road trip, I highly recommend it, even for novices like me.  And if you’re at all literary-minded and haven’t seen Rowan Oak – it’s time, with or without a whiskey.

[This is fifth and final post reflecting on the Southern Foodways Alliance Symposium of 2016.  As this posts, we are just a few days away from the 2017 Symposium.  And I.  Am.  So.  Ready.]

It’s always a little bittersweet as the weekend of the Southern Foodways Alliance Symposium comes to a close. Mostly bitter, I guess, because The Wife and I always wish we had another day or three there before getting back to reality. But also sweet – there are desserts involved.
This year’s theme was corn, and it even showed up in the small bites. In fact, some of the edible highlights of the weekend happen in the margins. (Yes – in between all the amazing multiple course meals, there are snacks!)
Truth be told, the bittersweetness starts at registration, because we know it’s going to fly from there. Then they feed us, so we forgive or forget – one or the other. This time it was a corn dog from Chef Kelly English. Corn dogs are simple to pick up, easy to eat, but not so easy to make. At least that’s my experience at home – my one experience. All that to say I can appreciate a good corn dog in my old age.
A Madeleine, so I’m told, is a little French butter cake that seems more like a cookie in the shape of a shell. One website described them as “often decorated with coconut”, which is probably the reason I don’t have them very often. And now I’ve been spoiled, because Chef Jean-Paul Bourgeois (Blue Smoke, NYC) made his out of cornbread and gave me warm Steen’s cane syrup mixed with butter to dip it in. Since the cookie is French and the syrup is Cajun, I think it was a match made heavenly in my mouth.
To wash things down, for the first time ever perhaps, we had a choice of fun sodas. I’m not saying we’ve ever gone thirsty – don’t forget the cedar tea, the corncob tea, the nitro coffee, etc. – but sodas are not usually part of the mix. Cannonborough Beverage Company of Charleston takes seasonal fresh fruits and herbs to make their sodas. That’s right: seasonal soda. We got to try Grapefruit Elderflower and Ginger Beer. I am eager to try their Raspberry Mint and Sorghum Thyme.

The next evening, as we enjoyed another presentation, we had a Corncuit. Give it a minute and you can probably figure this one out. Cornbread. Biscuit. Corncuit. This one was created by Chef Vishwesh Bhatt of Snackbar in Oxford. It was savory with a touch of sweet, shaped something like a parallelogram, and seemed to have a light glaze. Then the coup de gravy was a little tub of sorghum-curry leaf ghee to dip it in. Had there been a basketful, I would have probably made a fool of myself. 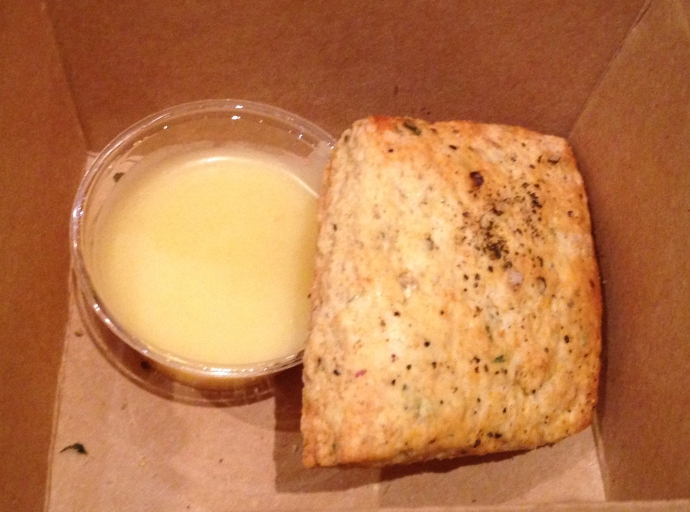 Of course, another reason they did not pass around baskets of corncuits is because dinner was coming shortly: The Saturday night Lodge Cast Iron Four Sisters Supper. According to our guide, “In Native American agricultural tradition, corn, beans, and squash are the Three Sisters.” All grow together, benefitting each other. Our supper was put together by four sisters, “because, sometimes, three isn’t enough.”
This meal always has a touch of home cookin’, and we saw that again this year. Dora Charles, chef and cookbook author from Savannah, Georgia, gave us butterbeans and okra, along with a crooked neck squash casserole. Helen Turner, pitmaster from Helen’s Bar-B-Q in Brownsville, Tennessee provided the Brownsville-style pork shoulder. These were the anchors – the bookends, so to speak. And solid anchors they were. Then things got twisty. 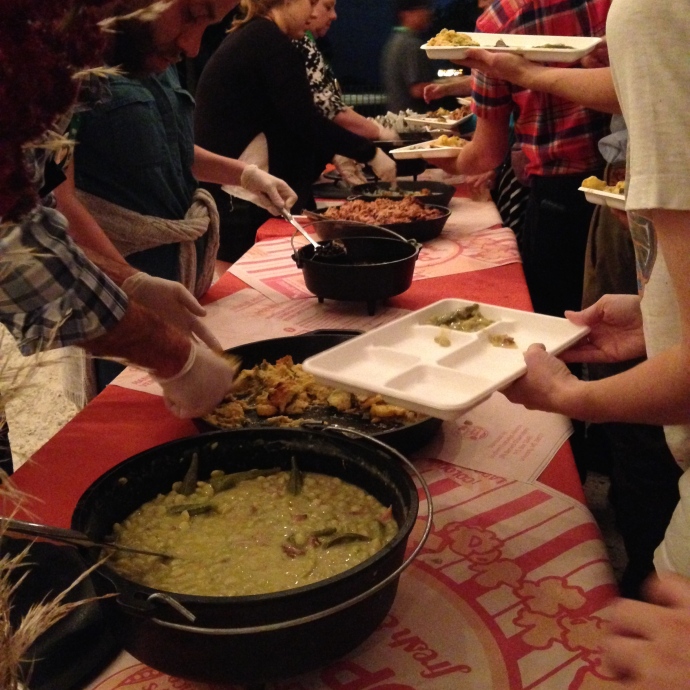 Cassidee Dabney of Blackberry Farm in Walland, Tennessee had two wildly different dishes. The first was Cherokee Trail of Tears Beans (a black bean thought to have been carried along said trail) with Smoked Venison and Wild Mint Pickled Onions. I’ve done similar combinations at home, but the pickled onions really cut through the creamy beans in this dish. The second dish was Crispy Hickory King Cornmeal Mush with Hominy, Pepper Jam, Dill Yogurt and Hazelnuts. This one reminded The Wife and me of Shafoot, a similar dish we had in the Middle East made with spongy bread and yogurt.
The other cornbread concoction emerged from the creative cooking of Cheetie Kumar of Raleigh (Garland restaurant): Indian Spiced Cornbread in a little square atop Wilted Greens, Charred Onion Compote and Paneer, with Butternut Squash Achaar (Indian pickles) on the side. This was yet another take on fusion of Southern and fill-in-the-blank food, and it was one of my favorites of the evening.
Sunday’s good-bye lunch has evolved over the years, and for the past two symposia we have been given a “Traveler’s Meal” as the last session ended. It’s a box lunch, but no less fabulous than the others. Chef Jean-Paul (Blue Smoke) was responsible for the smoky and tender beef jerky. Alex Raij (Txikito, NYC) introduced us to Gilda (not Radner) – a little skewer of anchovy, guindilla pepper (a favorite in the Basque region of Spain), and olives. A staple of Southern picnics, Cold Fried Chicken was cornmeal-crusted, crunchy and courtesy of Kelly English and Camron Razavi (Restaurant Iris, Memphis). For a little more corn, John Currence (City Grocery, Oxford) came up with a Sweet Corn Elote Salad. I love Mexican street corn, and this was a neat take on that concept that I intend to adapt early and often. The sweet of this bittersweet last meal was a sweet potato cookie from Chef Edouardo Jordan (Salare, Seattle). This was a hearty cookie – big and thick and chewy. And it had a kick, unusual for a cookie but welcome nonetheless.

The SFA Symposium is not all about the food we eat while we’re there. We’ve met fascinating folks from all over the South and beyond, as you can tell, from Seattle to NYC. And even corn is a fascinating subject to spend a weekend contemplating.

But I’m glad we get to eat.