All Hail the Huevos

(The 21st Southern Foodways Alliance Symposium is coming in less than 2 weeks.  I thought about exercising in preparation for the event, but instead I am warming up my tastebuds by reminiscing about last year’s meals.)

Consider the phrase “typical breakfast”. What does that mean to you? As a wee lad, we ate a lot of cereal in my house, and I still love a good bowl at any and all mealtimes, and just about anytime in between. But cereal wasn’t on the menu every day. I have fond memories of pancakes, waffles, biscuits and donuts. Bacon, sausage, and eggs. Grits and Cream of Wheat. Cheese toast, cinnamon toast, and buttered toast (with a clear pattern of the spots where each pat of butter was placed.) Gravy occasionally came with the biscuits, Blackburn’s syrup came with the pancakes and waffles. Chocolate milk was the drink of choice with donuts, Cran-Apple juice with everything else.  And when bacon “bits” came around (the authentic ones, made from soy) – well, they went in everything.

Even with all that variety, I suspect most of us would identify these foods as typical breakfast fare. But most of us reading this are American, and Americans in or from the South at that. “Typical” changes when the culture changes. We learned that firsthand when we moved across the big pond. Our Middle Eastern neighbors had eggs, but that’s where the similarities ended. There was bread, but it wasn’t biscuits. (Biscuits were cookies.) Instead we ate pita or little baguettes, and we used that bread as our utensil. Instead of eggs we might have bites of liver cooked with peppers, onions and tomatoes – or there might be beans mixed in with the eggs, or beans with the aforementioned onions, peppers, and tomatoes. There was no bacon at all unless we brought it in our suitcases.  Meanwhile, in another house down the street, Dutch friends were putting chocolate sprinkles on their toast. Australian visitors opened up a can of baked beans to go with their eggs. We learned a lot about “typical”, and we also figured out what kind of beans we liked best in the morning.  (Sorry, mates, but it wasn’t canned baked beans.)

At the 2017 Southern Foodways Alliance Symposium, the theme was El Sur Latino, or The Latin South.  Without leaving the comfy confines of Oxford, Mississippi, our taste buds travelled all over Latin America.  Breakfast, as is the custom at this meeting, was typically atypical.  Yet there were certainly recognizable elements.

The first morning of the weekend was brought to us by the country of Ecuador, courtesy of Chef Carla Cabrera-Tomasko of Bacchanalia restaurant in Atlanta.  But before I tell you what we really ate, let me ask this: does a plate of eggs, cheese, grits and bacon sound like a normal breakfast?  Maybe with a glass of fruit juice on the side?  Sure it does.  And that’s exactly what we had, in a slightly different iteration.  Scrambled eggs?  Check.  Cheese?  A blend of queso fresco and feta.  I asked about this, since I associated feta with Greek food.  She told me that the queso in Ecuador was a little saltier than what she was able to get here, so a little feta was added to the mix.  Grits?  Grits come from hominy, so let’s say we had “deconstructed” grits, as in whole hominy mixed in the eggs. (Or would that be “reconstructed”?)  Bacon?  How about crouton-sized bits of chicharrones?  The best kind, with layers of fat and meat still under the skin.  Plus a little touch of cilantro.  The dish was called Mote Pillo, and Chef Carla learned it from her father, who learned it from his mother, who turned 103 years old this weekend.  Hominy for breakfast must be good for you. 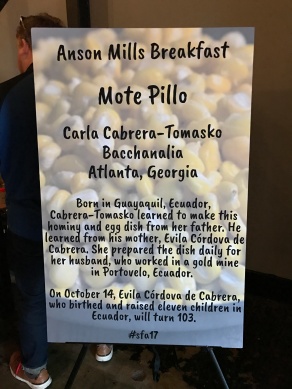 Of course, our friends from Royal Cup Coffee Company out of Birmingham were there to keep us caffeinated.  They had all kinds of options, including two varieties of cold brew for those of us who like our coffee cool and smooth on warm days.

My Royal Cups Runneth Over

The following morning the first meal of the day hailed from Mexico, but I’m not sure it was a typical Mexican breakfast, either.  The placard by the serving table declared the dish to be Chipotle-Poached Huevos and Biscuits, dreamed up by Chef Paco Garcia of Con Huevos in Louisville, Kentucky.  I’m all about the huevos.  Often when we dine at Mexican restaurants, my eyes gravitate toward the huevos section of the menu. (Cereal isn’t the only breakfast food I can eat any time of day.)  But this was different.

Remember that we are thinking along the lines of what is “typical”.  Eggs Benedict is a famous breakfast dish.  It may not be typical in the sense that many of us have it every day – even every week – but it’s familiar.  The classic dish is an English muffin topped by ham (or the like), a poached egg, and Hollandaise sauce.  Chef Paco did his own reconstruction using a biscuit, chipotle gravy, chorizo sausage, and a garnish of fresh avocado and avocado crema.  The bridge to “typical” was the simple poached egg.  I usually exercise control and only covet The Wife’s leftovers (she fills up faster than I do).  This year, after finishing hers, I stalked the table to make sure everyone had a fair shot at this container full of silky deliciousness, then snagged another.

It was going to be another four hours till lunch.  And I didn’t want to dry up and blow away.

2 thoughts on “All Hail the Huevos”