Sometimes choosing a restaurant can be a bit overwhelming. I’ve brought this on myself, I know, but that’s another column. As I write this, I am sitting in a hotel in Houston, Texas. Big city, hundreds of restaurants – overwhelming. In the end, I chose well, but again – that’s another column.
Even in smaller towns, when there is limited time, decision-making can be tough. Say you are going to Florence, Alabama for a work trip and only have time for one meal, but in the quad-cities area there are multiple places on the 100 Dishes to Eat in Alabama Before You Die app. (I’ve upgraded from the brochure). How do you choose?
Well, when I first found myself in that situation, I let my friends, the BFFFF’s (Both Fine Fellows From Florence) choose for me, and I was rewarded with good barbecue and a hot dog that hadn’t even made the list. Another solution? Go back and eat some more.
About a year ago the Mighty Jackets of Starkville High took on Florence High School, and we took that opportunity to go back to The Shoals. There are five places on the 100 list in Florence. One is Dale’s Steakhouse (of Dale’s Steak Seasoning fame) which, I was sad to learn, is Dale’s no longer. Another place was known specifically for Sunday brunch – and it wasn’t Sunday. The orange-pineapple ice cream from Trowbridge’s? I got that last time. We weren’t dressed to go to the revolving restaurant. That left one choice – Ricatoni’s. Since that was my first choice, anyway, it worked out perfectly.
Of course I couldn’t go to Florence without checking in with my buddies, so we set a time to meet the elder BFFFF and his wife (which also makes her a BFFFF – Bride of Fine Fellow From Florence). As we walked up the sidewalk to the restaurant a man with a Ricatoni’s t-shirt was hanging around out front. When he turned and saw our SHS gear he said, “Are you Jerry?” (If you say my full name quickly it sounds a lot like Jerry. And I am Jerry on my birth certificate, so I answer to that, too.) “Yessir!” I said. “I’m Ric,” he said, “I’ll walk you back to your table – your friends are waiting for you.” If you’re doing the math at home, Ricatoni’s begins with Ric. Now I understood why it wasn’t called “Rigatoni’s”. See what he did there?
The BFFFF’s were waiting for us, and the table was already set with the fresh bread (kept warm in a paper bag) along with the herbs and olive oil for dipping – this was the dish on “the list”. We were especially happy because this is something we do a lot at home, except our bread is not nearly as good as Ric’s. Another friend from Florence (AFFF?) who had already publicly declared that this was one of her favorite restaurants told me to ask for a bowl of tomato cream sauce to dip in as well. We did. Also good. Now we just had to choose the perfect meal – yikes.
The BFFFF’s had their favorites already, one of which was Shrimp Spiedino – that’s Italian for skewered shrimp. This one was breaded with seasoned bread crumbs, grilled, and topped with lemon butter sauce. And because he is a good guy, he let me try one. I was impressed. For the newbies, Ric had recommended the veal, so I ordered Marsala and The Wife ordered Parmesan, because she’s a Parmesan kind of gal. Oh, and lest I forget, I also got a bowl of the soup of the day – a chowder with shrimp, with which I was also impressed.
On the side of many of the dishes (including ours) was Tagliarini Piace Pellerossa, a pasta topped with a sauce made from crushed tomatoes, basil, olive oil and garlic. It sounds simple, but it was a sight for the eyes as well as the taste buds: flaming bright red and whole cloves of garlic tossed in with abandon. I apologize to the people who sat in front of me at the ballgame, because I ate all the garlic. (It’s good for you, and I’m a pharmacist – I wouldn’t steer you wrong.) 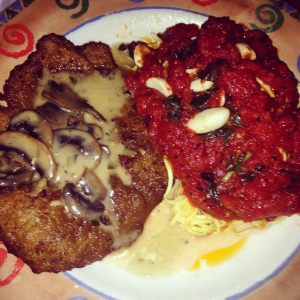