I’m just going to put it out there. Food Network has nothing on Starkville.
I will give them credit for fueling the nation’s fascination with competition cooking shows. I’ve watched my fair share. But the only things missing from the Backyard Gourmet Grill Off at the Everything Garden Expo last weekend were a concrete floor and a television camera. Oh, and maybe the ten thousand dollar prize.
Two semi-pro grilling teams faced off just outside the north end of the MS Horse Park arena floor. (Thus, the lack of concrete underfoot.) I say semi-pro because both team leaders are in the restaurant business and have grilled competitively, but this day they were “off the clock”. Matthew Bedwell and Mike Nolan came as Accidental BBQ, though after watching them strategize, I saw nothing accidental about it. The other team, Hoss and Little Joe, are known around these parts as John Lee Peeples and Charlie Hester, though it was never made completely clear which one was Hoss and which was Little Joe. 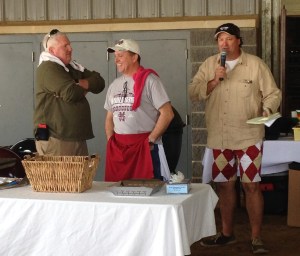 Before the event, both teams knew at minimum they’d be dealing with some part of a chicken, ground meat, and a truly mystery ingredient. Though it was patterned to a large degree after Chopped and Iron Chef America, the focus of the Grill Off was to show novice grillers (like me) what we might do in our own backyards. In other words, the mystery baskets were manageable – no dragon fruit, caviar or Captain Crunch from which they would have to derive a charcoal-grilled entrée. Just basic grillable grub.

Behind the teams was a table full of basic kitchenware and several shelves of fruits, vegetables, condiments and other pantry staples, thanks to Vowell’s Marketplace, EMCC, Mark Guyton and a few local farms. Each team had access to an extra-large Big Green Egg and two Weber charcoal grills. Forty-five minutes was the time limit from the moment they opened the baskets until the dinner bell rang and “hands off” was called. Three of the four meats in the basket had to be used in some form or fashion, along with one side dish (sweet or savory), using anything in the pantry. They brought their own knives and grilling utensils, and each had an appointed volunteer to do whatever was needed – chopping, washing, or finding the can opener. Ten points were awarded for taste, because really, that’s what matters the most. Up to five more points could be snared for originality and use of the secret ingredients. And it was decided that presentation and plating would serve as a tie-breaker because let’s face it: in the backyard, that’s not really the point. 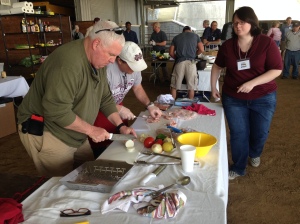 The judges for the day were John Correro (of MSU football sideline fame), Cherri Golden (a self-proclaimed “woman about town” and food writer in Columbus), and Chef Shannon Lindell (from the faculty of EMCC’s Culinary Arts department). The emcee was the infamous Hobie Hobart – thankfully nobody on the teams seemed distracted by his shorts. Wes Shelton (of Bell’s Building Supply, the main sponsor along with sister store, Thyme) was the Green Egg wrangler and charcoal guru, keeping all the fires hot for both teams. And should Wes ever become weary of lumber and nails, he is certain to find work as a producer for Food Network. Or someone’s personal outdoor chef. 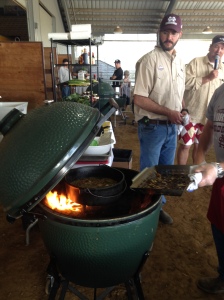 Guru of the Green Egg

It was quite interesting to see the techniques of both teams in action. One had a Moleskin notebook with the meal planned out as far as was possible after a pre-contest study of the pantry. The other admitted in a post-contest interview that his ideas were forming as he trimmed the chicken. When the baskets were opened, the teams found ground chuck, ground pork, chicken leg quarters and Beaverdam Farms smoked pork sausage – lots of wonderful grilled possibilities. 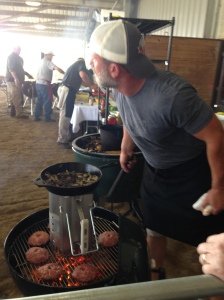 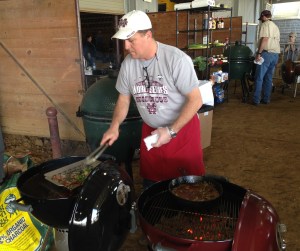 Now to the plates. Hoss and Little Joe mixed the ground pork and ground beef to make burgers, stuffed them with Progress Cheese Barn feta and bits of onion, and layered them with slices of avocado and Beaverdam Farms tomato. All that on a Swiss Zopf roll from Milk and Honey Farms. Next to it on the picnic plate was a seasoned chicken quarter smothered with a pineapple/brown sugar sauce, with a kick most likely provided by our friend Tony Chachere. The side was something they called Backyard Beans. The pantry offered black, red and white beans and they used them all, along with grilled onions, peppers and chunks of the smoked sausage. 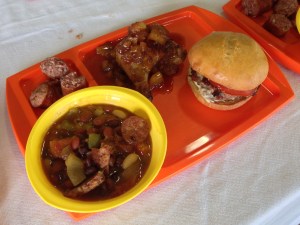 The Final Product from Hoss and Little Joe

Accidental BBQ also created a beef/pork combo burger – a mix that really worked. Theirs was topped with farmer’s cheese, garlic mayo (created on the premises from Bountiful Harvest garlic), and a bacon-onion-balsamic jam cooked in a cast iron skillet directly on top of a charcoal chimney. The chicken was put into action by stir-frying it with rainbow peppers and onions – not something you see done every day on a grill. (Then again, I’ve never made bacon jam on my grill either –maybe I need to spend more time down at Matthew’s house.) For the side, they went for a red bean concoction of a completely different sort, mixed with Lancaster Farms green onion, tomato, and corn that was roasted on the Big Green Egg. 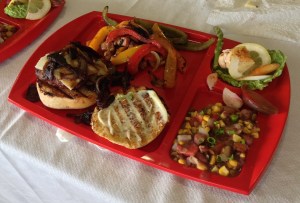 Matthew Serving it Up

When it was all over and the judges had made their decision, those of us standing around drooling over what they had left behind also had a decision to make – should we trust them and wonder? Or eat the leftovers? Well, as someone who used to live in a country where we ate with our fingers and double-dipped from a communal dish, the decision was easy. I found a clean fork and dug in. No regrets – it was yummy. 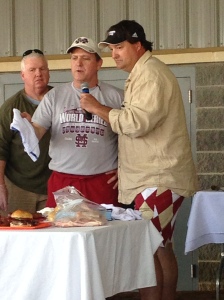 “This is what we call, in the restaurant biz, a towel.” 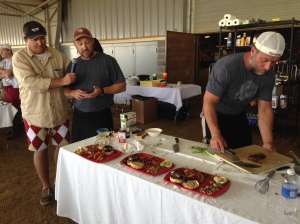 Hoss and Little Joe took home the very first Backyard Gourmet Grill Off Golden Spatula Award (which was neither gold nor an actual spatula, but a prize nonetheless) and bragging rights for the next year. But here’s my suggestion: if you have a chance to eat in either team’s backyard – take it.

Winners of the Golden Spatula