As far as I’m concerned, there are no rules when it comes to cooking.  Yes, there are some common sense principles to guide us so that we don’t outright ruin the food – we must be teachable – but rules are optional.  When I originally began pondering this idea, I was fresh from watching an Iron Chef America episode where chocolate was used in every course.  It was especially intriguing, given that there was very little dessert offered among the courses.  Chocolate in a savory dish?  Isn’t there a rule against that? Apparently not, according to the Iron Chefs.

Shortly after that rule-smashing episode I went exploring at the grocery store and came home with sun-dried tomatoes and banana pepper rings.  I had no recipe in mind – I just dig ‘em.  For lunch that day, we decided to have tuna salad   and I thought it would be fun to add both the tomatoes and peppers, with a splash of spicy brown mustard.  For The Wife this was a bit of a stretch – thankfully, it was a successful stretch. You see, I come from a loaded tuna salad family: sweet pickle relish at a minimum, sometimes eggs, apple if we got really ambitious, and pecans if Younger Brother and I were not involved in the meal.  Then I married into a family that defined tuna and mayo thrown together in a bowl as tuna salad.  So for a while I lived in the least common denominator rather than make two different batches.   When we lived overseas, tuna and mayo were easy to come by, but sweet relish was a rarity, so it turned out to be an easy paradigm to live under.  On the other hand, during our first week as expatriates in that Kingdom of Far, Far Away we were treated to tuna salad with mandarin oranges and raisins.  I was thunderstruck.  A fruit other than apple in my tuna?  It was so simple, yet added so much flavor.  Perhaps this is where my interest in grilled fish with fruit salsa was born.  You never know.

Have sun-dried tomatoes and banana peppers ever been used in tuna salad before?  (Or since?) I don’t know.  And it doesn’t really matter.  I branched out, I enjoyed it, and I would do it again.  But in the interest of full disclosure, there are also times I branch out and enjoy it but don’t do it again.  As the Iron Chef judge said about her chocolate entrée, sometimes once is enough.  On that matter I just have two words: lamb fries. 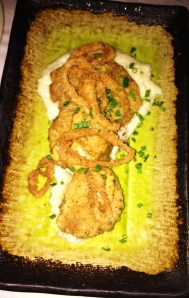 They were great. Once.

The premise behind my rant is this: there’s a first time for everything.  Not a very original phrase, I grant you, but I can’t think of a better way to say it, either.  As the historians surmise, men ate raw meat before lightning struck it once – or perhaps they dropped a bit of wooly mammoth in the fire and realized it was better that way.  I’m sure Glug thought his neighbors were crazy when he saw them dropping their meat in the fire at the All-Day-Grunting-And-Dinner-In-The-Cave meeting the following week.

Who was the first person to pour milk on their cereal?  I pondered this as an older child, and decided to try Cranapple juice on Cheerios as a snack.  Sure, it was different, but it was a good different – I ate/drank it many times after that and have good memories of the combination.  My experiment was completed long before Googling was possible, but since then I have searched and discovered that others have followed my lead in breaking the cereal/milk rule.  I found references to orange juice, coffee, yogurt, Bailey’s Irish Cream, and melted butter – just to name a few – all poured over dry cereal.  I felt vindicated.  (And for the record, I offer this disclaimer: I am not recommending that anyone eat a bowl of Bailey’s and Wheaties in the morning – certainly not the breakfast of champions.)

Even Son has been subtly trained in the idea of “almost anything goes.”  When I was but a youngster, we were gifted a shaker of Tony Chachere’s Cajun Seasoning, and began to use it in just about everything that required salt and pepper.  I brought that habit to the marriage, and eventually bought a separate salt-shaker just to add a little class to our Tony’s on the table.  The Wife didn’t understand – she thought that if I was adding Tony’s to her food, it must mean I didn’t like it.  It took a while to convince her that it was just like adding salt –   the label even says so – and I was only enhancing the already wonderful flavor of her meal.  Son, who didn’t like to use common toothpaste because it was too “spicy”, soon picked up on the Tony’s habit. Go figure.  He went through a phase when he would shake it on his breakfast toast, his cheese sandwiches.  Daughter, not to be outdone in the rule-breaking category, eats a Nutella-on-white-bread sandwich several days a week.  (No Tony’s.)  No rules.

Put it on the pedestal it deserves.

In the end, can we just agree that rules are relative?  Most chefs turn their collective noses up if steaks are cooked much beyond medium, but my Maw-in-Law doesn’t know that rule.  If her steak doesn’t get confused with a charcoal briquette, she sends it back.  Rules or not, it is still wise to employ common sense.  If you live in a pork-free zone as we did for ten years, and you get your hands on a Boston butt, you take exquisite care of it and don’t play.  It’s not worth the risk of ruining it with over-experimentation.  But if you live near the Piggly Wiggly and can afford to toss a failed experiment in the trash if necessary, I say go for it.  Put some chocolate in your casserole or glaze your ham with a Cranapple juice reduction.  Just go easy on the Kahlua in the morning – that’s not what they mean by Special K.