The Dilemma of the Menu

I am what you might call an avid reader.  I always have at least one book going and I try to divide my reading time between different genres of literature.  Some genres are easier to read than others – for example, a John Grisham novel in progress will be picked up during any free moment (and I use that term loosely) until it’s done.  On the other hand, the books on drug interactions or business leadership, as important as they may be, take much longer to plow through.   It may be, however, that the printed media which presents me the most difficulty is the restaurant menu.

Allow me to provide a little context.  Suppose you are seated at your favorite Mexican restaurant.  You are handed a menu which in weight and square footage is second only to the oversized coffee table book on the art of the Louvre that you picked up in France, the same one for which you had to pay an extra baggage fee just to get it back home.  In order to open it fully, the person next to you has to scoot over or duck.  Why?  Because menus at Mexican restaurants are long.  Mucho long.  This is why, in my opinion, the menu items are generally given numbers.  It’s just easier for our amigos in the back.  Ditto for many Chinese restaurants: long and carefully enumerated menus and the buffet to boot.

When these extra-large menus are handed to me, they sometimes create a moment of anxiety.  Though I am a big proponent of variety, having two-hundred choices is a bit overwhelming.  I may make fun of The Wife for automatically ordering chicken fajitas at any restaurant where chips and salsa are put on the table before the server arrives, but I have my limits, too.  I want enough choices to be able to have a different dining experience each time I go to that restaurant if I so choose, but I don’t want to have to spend fifteen minutes reading the menu.

The other extreme is the miniscule menu.  Last week we were in Tupelo and ate at a little place called The Neon Pig.  Believe it or not, it is not a barbecue joint.  I found it via yelp.com and saw a lot of great reviews on something called a Smash Burger.  My attention has been turned to burgers of late and it sounded like a good opportunity to broaden my burger horizons.  Plus, someone mentioned they’d eaten a fish taco of some sort, so that was enough.  Had me at hello, so to speak.  My plan for the three of us (Daughter was not on the journey and Son is generally willing to accept my assistance in ordering) was to get a Smash Burger, fish tacos, and something-else-to-be-named later.  Named by me, of course. 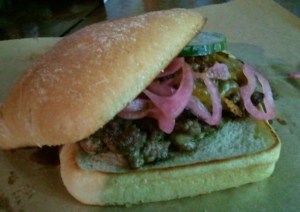 We arrived and the menu was tiny.  (So was the restaurant.)  There are essentially ten items to choose from.  Ten.  One salad.  Two burgers.  Three sandwiches (three different meats.)  Then three more sandwiches under another heading.  One dessert: cake.  And that was it, save one daily special and two options for the “piglets”.  It took about a minute to read.  I also discovered in that minute of reading that the fish tacos were not to be found, thus must have been a daily special at some point.  We got our own drinks from the cooler (Abita root beer for me) and picked our own chips off the rack (a half dozen flavors of Zapp’s.)  And we all ended up ordering burgers.  Simple.  The downside is the answer to this question: how many times could I go there before I ran out of things to order?  Not many.  The upside?  The burgers (we got a Smash and a Bash) were fantastic – definitely worth having again.

Another menu-related challenge has to do with those items not on the menu at all, sometimes known as the daily special.  I always want to hear the specials.  And more often than not, I give them a try.  Who knows?  It might be some fantabulous combination of flavors and textures that may never again be repeated – and what if I missed it because I ordered something off the menu that will still be there the next time I go?  It’s not a foolproof plan – specials can be risky, and I have made choices that made me covet The Wife’s chicken fajitas – but it works enough to keep trying.

There is another category of off-the-menu items as well.  They’re not necessarily daily specials, but they are back there in the kitchen, waiting to be requested.  Like the time a couple of years ago when I was at the Starkville Café for breakfast and said, “Hey, do you think I could have an omelet with barbecue in it?”  The answer was yes, and I have requested it a time or two since.  Still not on the menu, but still available for the asking.  And still my favorite breakfast at the Café. 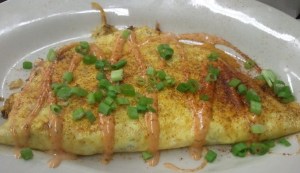 If I have discovered any relief to this menu dilemma, it is this – my motto, my mantra, my modus operandi…

I have said it a bazillion times.  You have not because you ask not.  Menu has more pages than the Affordable Healthcare Act?  Already carefully chose from the online menu then they tempt you with a one-time seasonal special?  The rhyming of Smash Burger and Bash Burger throwing off your decision-making?

Ask your favorite restaurant guide site to show you the reviews.  Ask the server to share his or her favorite item.  Ask The Spouse and Kids to order the other things you want and pass them around.  Just ask.  And enjoy it all.

One thought on “The Dilemma of the Menu”