Posted on September 1, 2013 by eatsoneate

Some birthdays require a party.  The Wife turned 40 in May: that’s a party-worthy year.   My birthday was last week.  46 just doesn’t have the same pizzazz as 40.  It did not require a party.  But that doesn’t mean we didn’t eat.  Usually birthdays in our household generate a dinner out.  I finagled two this year.  But I also view birthdays like Wal-Mart views Christmas – it’s not just a one-day event, it’s a season.

The terrible truth is that I woke up on birthday morn feeling a little less than 100%.  Talk about disappointing.  This is a day when I want to be able to eat with abandon.  That doesn’t mean I will – doesn’t mean I ought to– but I should have the freedom to make that choice.  So I started off the day with only a cup of coffee.  But it was a really good cup of coffee.  I had secured a bag of King Cotton Coffee Roasters Ethiopian Sidama coffee beans at the Community Market a few weeks ago, and like so many other good ideas that have fallen prey to procrastination, they were still sitting in my cupboard unopened and un-ground.  It was a good day to break them out.  I added a little brown sugar and some caramel creamer, and it was truly one of the best cups of coffee I have had in a while.  What makes it even more fun is that the beans were roasted right here in Starkville.  Off to a good start.

By lunchtime I was on the upswing but still not ready to tackle anything a big meal.  Back at home I wandered out to the back corner of the yard (dotted with Lowe’s 5-gallon buckets) that The Wife lets me call a garden.  I remembered seeing a couple of orange jubilee tomatoes that had pushed their way out of the blooms despite my neglect.  Much to my surprise, they were perfectly ripe – small, but enough to make a sandwich.  Oddly, these specimens were a bit tart compared to their sweet sisters that appeared earlier in the season.  But they made a great BLT birthday sandwich, hold the L.

That evening we had a lot going on at the hacienda, Son was in Noxubee County at the ballgame, and The Folks were on their way to a family reunion in Tishomingo County.  No big family dinner was in store.  But Daughter had requested waffles earlier in the week, and it seemed like a good time for breakfast for dinner.  I made normal waffles for my ladies, but for myself I added some pre-cooked Beaverdam Farms pork sausage to the batter.  I knew I liked sausage with my waffles – why not put sausage inside my waffles and skip the middle-man?  It worked.

Saturday morning I was up early and at the Community market – the last of the season.  What a bummer.  But I made the most of it.  Ms. Orene, the neighbor and secret weapon of Lancaster Farms, had posted on Facebook the night before that she’d made a chocolate cobbler.  I suggested to her that she bring some to the market the next morning.  And she did!  You have not because you ask not, people: words to live by.  Next on my agenda was a glazed chocolate chip scone from B’s Sweets and Treats, who later provided me with my last glass of mint lemonade for the summer and a loaf of cream cheese blueberry bread we nibbled on all weekend.  The culinary demo was put on by Chef Carnelle and his crew from Harvey’s: cheddar grits topped with grilled vegetables, tasso ham, bacon and a tomato cream sauce.  It was only 9 am, and I had made my own birthday breakfast buffet. 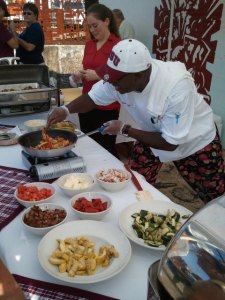 Chef Carnelle getting my breakfast together

The fam had lots of home projects to accomplish on Saturday and I’m quite certain I worked off all the calories I had consumed in the last 36 hours.  A fresh start was in order.  Daughter had another great idea – Stromboli’s for birthday dinner.  At heart I am a pizza and ice cream guy, so I didn’t need much arm-twisting.  And since it was the heart of birthday season I was allowed to order for the table.  We started with toasted ravioli (an all-time favorite) then moved on to barbecue pork pizza, Brooklyn Stromboli, and chicken ranchero calzone.  Daughter’s meal was an order of pepperoni-and-cheese bites, but she let me have one.  And the famous cookie-dough bites closed it all out.  Still livin’ large and I fear the scale will show it because the night wasn’t over.  Bops helped us fulfill the ice cream portion of the dream dinner.  (I know, I know, it’s custard). Bop’s Favorite (a concrete with chocolate flakes and strawberries) is my go-to order there, but I had seen a Tweet earlier in the week about lemon icebox.  It was a very tasty diversion.

The Folks were back on Sunday, which meant it was time for the second dinner out.  I had satisfied my pizza cravings the night before, but now I had steak on the brain.  We went to Harvey’s and I think we had every steak on the menu.  Half our party got the special, the gourmet hamburger steak, Son got the prime rib, and I got my long-time favorite, the marinated ribeye.  Daughter got the filet mignon.  Yes, “Picky Chick” has moved from the kids menu to the fancy steak in a single bound.  Of course I had some of everybody’s.  I’m the birthday boy, see?? Dessert was provided by the one who birthed me – a giant decorated cookie, which we shared with the server.

Someone asked me Saturday why I was not one thousand pounds (which is twice the usual five hundred that accompanies that question, by the way).   I guess it’s because it’s not birthday season every week.